Big thanks to Jop van Bennekom and Penny Martin for sharing their thoughts on Fantastic Man and The Gentlewoman with me in front of over a hundred EDO members last week. The Mother canteen area was a perfect addition to the EDO’s range of venues, and was pretty much full to hear the two editors talk about their publications. 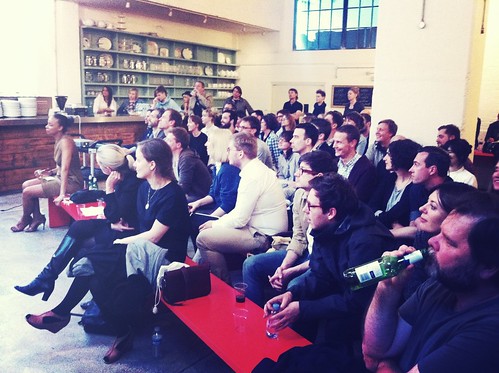 The main message from the evening shouldn’t be a surprise but is always worth hearing again: a successful magazine needs a strong idea behind it. Even if that idea is implicit rather than explicit, it informs every decision about the content and provides clarity across the piece. Fantastic Man remains remarkable for taking such a simple concept – celebrating what’s interesting about real men (albeit a pretty high-end version of ‘real’) rather than the usual round of models, celebrities and products – and not only executing it so successfully from the start but maintaining and enhancing the idea issue by issue. Hearing Jop discuss his magazine it was clear he had extreme clarity about what it stood for.

We also learned the magazine was almost called Sexy Man (what a different magazine that would be); that latest cover star David Beckham is planning to open a chain of pie and mash shops (!); there are no plans for an iPad app; and that despite a good start The Gentlewoman is proving a harder character to define than her older brother.

The next issue of Gym Class Magazine will be running a transcript of the evening’s discussion.

Thanks to Luis for the photos.