No chance to post much this week as I’ve been in India judging the first Kyoorius Awards. Set up with the support of D&AD, the awards are the latest addition to local paper company Tranasia’s campaign to celebrate and develop Indian graphic design. Kyoorius already produce the annual Designyatra conference in Goa and a quarterly magazine. 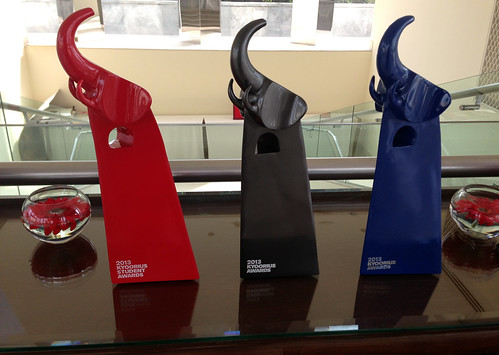 We’re half way through judging and today will be sorting out the winners of these fine beasts – the Kyoorius Elephants. The blue one is the primary award, the black one saved for the best of the best. The red student award is being judged at another time.

I had no idea what to expect of Indian graphics, but have been surprised by the quality of much we’ve been looking at. As with all design competitions there’s been a mix of good and bad on the table, but a personal highlight has been some beautiful illustration work. Local judges Tania Singh Khosla and Elsie Nanji have done a good job helping the rest of us (western) judges have an idea of the context for all the work, which ranges from general graphic communications through brand identity and digital to spacial design and books. Only a few magazine projects were entered.

The man behind Kyoorius is Rajesh Kejriwal, one of those forces of nature who quietly get on with making big things happen. A big thank you to him and the Kyoorius team for looking after me and the other guests so well during our trip to Delhi.

Off now make sure at least one of the magazine entries makes it through to nomination stage.