The latest Printout took place earlier this week. The evenings have now developed their own structure and routine. Steve and I have learned not to worry about advance ticket sales, we almost always fill the Book Club basement, however late people leave it to book; there’s usually a good mix of familiar faces and newcomers attracted by a particular magazine; and there’s the inevitable last-minute tech problems to do with the projector (this week my laptop died and the remote control didn’t work with the replacement so I spent the evening pressing keys). The speakers deliver their talks, there’s a quick Q&A Session, followed by some beers and talk.

But none of the above would mean anything without the speakers and their talks. We vary the theme and range of speakers, but the common factor that links every Printout is the passion, commitment and openness of the participants. Most of the projects are independent magazines made by small teams who are often working in isolation. Talking about their projects publicly is a chance to share their passion, and without fail the speakers exhibit enthusiasm which is both inspiring and infectious. 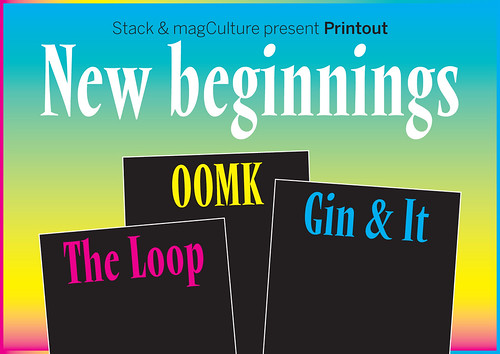 This week we featured three very different new launches under the title ‘New Beginnings’, a satisfying combination of subjects and approaches, but all shared that essential passion for magazines.

First up was children’s magazine The Loop, which launched its first edition just before Christmas (reviewed here). Editor Eleanor Meredith introduced the newspaper-format publication and explained both the creative and publishing thinking behind it. The project is a sideline to her career as an illustrator and teacher, and has been funded by her illustration agent. They have a sensible four-issue plan to build a readership (it’s a quarterly) but she explained how the magazine had taken much more of her time than expected, a common problem. Research counts – they’ve worked with schools to develop the magazine – and small steps matter; they’ve just been accepted for sale at the V&A.

Next was a project so new the first issue had only just arrived from the printer that morning. OOMK (One Of My Kind) was described by its trio of editors as their first move away from zines to a more magazine-like publication. Sabba, Sofia and Rose shared the mic to present their project, explaining their hope to make a magazine that reflected both their feminism and Muslim backgrounds. They spoke eloquently about the work that went into planning the magazine, defining the differences between it and earlier zine projects (less spontaneity, more structure). They raised the funding to print the launch edition online. Look out for a longer review here soon.

The third speakers were editor Kate Hawkings and designer Daniel Penfold of Gin&It. Being published by the same team Fire&Knives meant they had a different story to tell, one of relative freedom provided by F&K editor/publisher Tim Hayward but also of inevitable comparison with the sister title. The need for an ampersand in the name and for the design to reflect the bookish aspects of F&K were mentioned. Kate and Daniel are both from journalism backgrounds but even they had clearly moved into completely uncharted territory launching their own magazine. their magazine is another quarterly, appearing between the quarterly editions of F&K and looking to subs and single copy sales to earn its way. Gin&It was one of the magazines reviewed during our recent magRush.

Too much was discussed to give a complete round-up here, but perhaps the singular piece of advice to come away with from this Printout was ‘do it’. However much you plan, you can’t prepare everything. You have to learn along the way. And the process starts by jumping off the edge, fingers crossed.

Thanks to all the speakers and to everyone that came along (photo above by Nick van Buuren, speakmedia.co.uk).